SAN CLEMENTE, CA — April 6, 2020 —  IT Brand Pulse, a trusted source for research, data and analysis about data center infrastructure, today announced the 2020 networking Brand Leaders, voted by IT professionals from around the world. The independent, non-sponsored annual survey asked which vendors are perceived to be the market, price, performance, reliability, innovation and service and support leader for twelve networking product categories. 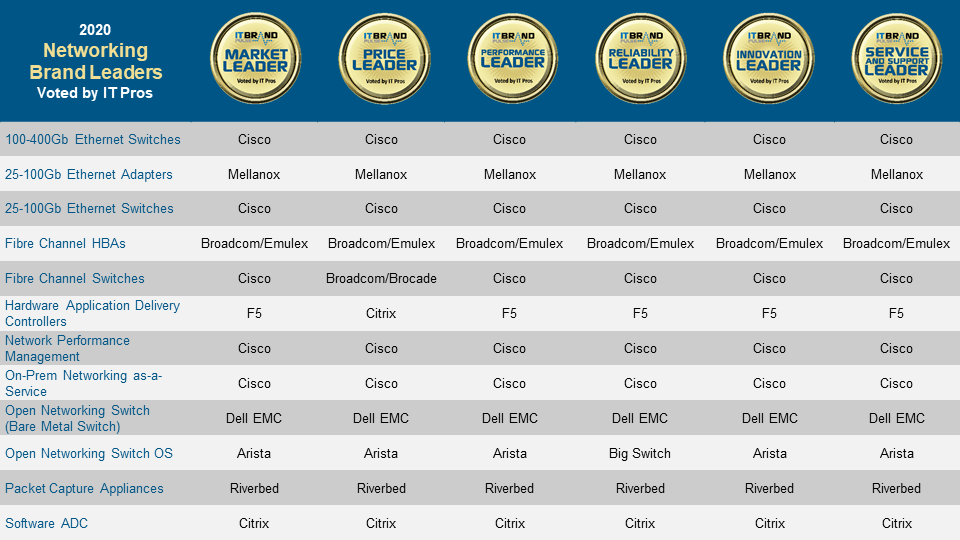 Broadcom
25-100Gb Ethernet Adapters
IT Pros voted Broadcom and Intel as the new leaders for 25-100Gb Ethernet Adapters. Broadcom was voted Market, Price, Performance and Innovation leader; while Intel, second place for Market, was voted Reliability and Service & Support. Mellanox, the leading competitor for the previous two years, was bumped down to third for Market.

Fibre Channel HBAs
Broadcom and their Emulex brand HBAs proved to be the clear leader for Fibre Channel HBAs as they received the majority of votes from IT Pros for Market, Price, Performance, Reliability, Innovation and Service & Support – making this their fourth consecutive year dominating in every segment. The other two competitors in this category, Marvell with their QLogic HBAs and ATTO, finished second and third in that order.

Citrix
Software ADC
After a year hiatus in 2019, Citrix has regained the Market title for Software ADC, making this their sixth Market leader recognition. Citrix controlled the rest of board as IT Pros also voted them the leader for Price, Performance, Reliability, Innovation and Service & Support. F5, last year’s Market leader, was voted second all around. Fortinet was voted third for Market.