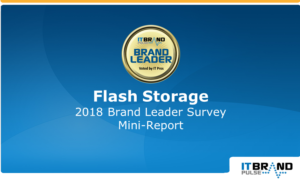 IT professionals from around the world responded to the independent, non-sponsored annual survey in June 2018, asking which vendors they perceive to be leaders in these sixteen categories:

“The industry is moving to storage media and networks with microsecond access times, and vendors are jockeying for brand leadership in the new low-latency market,” said Frank Berry, CEO and Sr. Analyst, IT Brand Pulse.  “The results of this survey indicate Intel is establishing incumbency for ultra-low latency media; Pure Storage and NetApp are solidifying their new leadership in AFAs as Samsung has done in SSDs and NAND; with ScaleFlux first out of the gates for computational storage.” 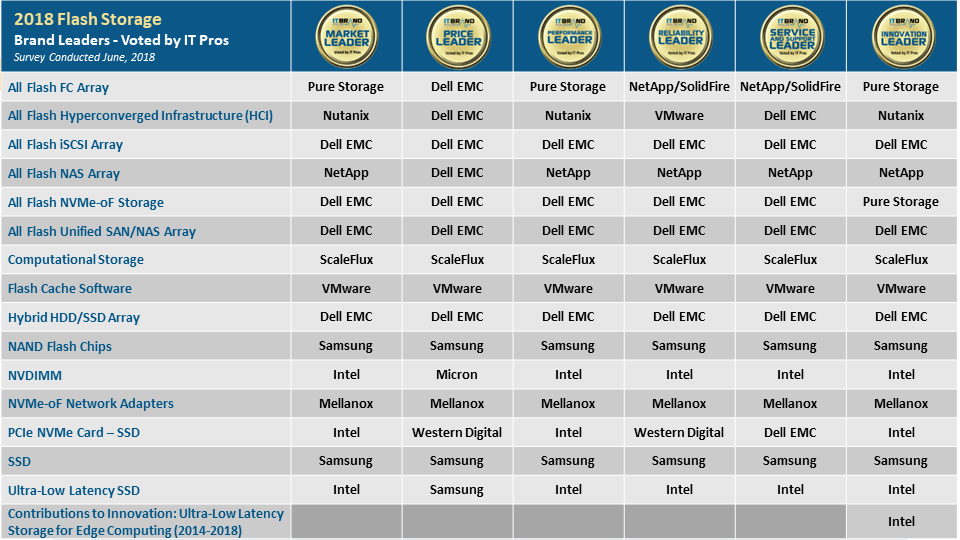 Intel
NVDIMM
Intel emerged as a first-time Market Leader in this survey for NVDIMM and also was the choice for Performance, Reliability, Service & Support and Innovation. Runner-up, and 2017 winner, Micron, picked up the Price title. HPE took the third all-around spot.

PCIe NVMe Card – SSD
Another new Market Leader victory for Intel came in the PCIe NVMe Card – SSD category, breaking up Western Digital’s six-year lock on the top position (pushing them down to second this year, ahead of Dell EMC). Intel split up the remaining honors, capturing both Performance and Innovation, leaving Price and Reliability to Western Digital, and Service & Support to Dell EMC.

Contributions to Innovation: Ultra-Low Latency Storage for Edge Computing (2014-2018)
IT pro respondents were asked to bestow a special achievement award in the 2018 Flash Storage brand leader survey.  For “Who contributed most to innovation in Ultra-Low Latency Storage for Edge Computing over the past five years?” voters selected Intel over second-place Samsung.  Dell EMC, HPE, and Mellanox filled in the lineup results, respectively.

Samsung Electronics
SSDs
Samsung prevailed at the top of the leader board, pulling down a fifth SSD Market award—plus awards for Price, Performance, Reliability, Service & Support and Innovation. Intel was next for Market Leader; Western Digital, third.

“Samsung is honored to have been selected for our multi-faceted customer focus in solid state storage and NAND flash by those most instrumental in transforming today’s data centers,” said Jim Elliott, corporate senior vice president, memory sales & marketing, Samsung Semiconductor, Inc. “We take great pride in delivering the best in NAND flash and SSD performance, reliability and customer service to ensure the most innovative IT solutions.”

Pure Storage
All Flash FC Array
Last year’s All Flash FC Array Innovation Leader struck it big this time around as end users handed Pure Storage not only this title once again, but added first-ever Market and Performance honors. NetApp/SolidFire and Dell EMC finished second and third as Market Leader.

“Pure Storage is honored to be recognized by IT professionals all over the world as a first-time Market Leader, in addition to being recognized again as an Innovation and Performance Leader for All Flash FC Array,” said Jason Nadeau, VP of Product Marketing, Pure Storage. “We are committed to helping our customers build a data-centric architecture and these acknowledgements reassert that we are heading in the right direction towards achieving our goals.”

“We are pleased to be recognized by IT professionals for excellence in NVMe-oF Network Adapters with a sweep of all six award categories: Market, Price, Performance, Reliability, Service & Support, and Innovation leadership,” said Rob Davis, VP of Storage Technology, Mellanox Technologies. “By providing the most efficient data delivery and acceleration offload technologies, our ConnectX® network adapters and BlueField Storage SoC solutions deliver dramatic performance improvements to match networking bandwidth to ever faster storage and data processing requirements.”

ScaleFlux
Computational Storage
Another product category—Computational Storage—made its entrance into the annual Flash brand surveys resulting in ScaleFlux as the top vote-getter for all six leader distinctions: Market, Price, Performance, Reliability, Service & Support and Innovation. NGD and Agylstor were number two and three, across the board.

“As the pioneer in deploying Computational Storage at scale, we’re thrilled to be recognized as the market leader for this newly defined category of Flash Storage,” said Thad Omura, EVP of Marketing for ScaleFlux. “The performance and efficiency benefits of bringing compute to data is being realized on production workloads worldwide. We’re excited to be frontline innovators in this disruptive field as adoption of Computation Storage by cloud and on-prem data centers ramps up.”

Nutanix
All Flash Hyperconverged Infrastructure (HCI)
Nutanix continued as both HCI Market and Innovation leader for a third time, in as many surveys, combining it with a 2018 Performance title. Dell EMC (second pick Market Leader, in front of VMware) captured Price, and Service & Support, with VMware taking Reliability.

IT Brand Leader Surveys
IT Brand Pulse awards are the symbols for brand leadership; covering hundreds of IT categories each year – from servers, storage and networking to cloud, software and other broad IT market segments. Measuring the perceptions of global IT professionals from large enterprise, medium enterprise and HPC environments, winners are voted in surveys that are independent, non-sponsored research. The surveys are designed to capture the pulse of brand leadership in different product categories. In these surveys, respondents are asked to vote for the overall Market, Innovation, Performance, Reliability, Service & Support, and Price leaders from a randomized field of provided vendors (or write in choice under “Other”).