SAN CLEMENTE, CA – April 5, 2018— IT Brand Pulse, a trusted source for research, data and analysis about data center infrastructure, today announced the results of the recent IT brand leader survey covering Networking & Storage products.  IT professionals from around the world responded to the independent, non-sponsored annual survey in March 2018, asking which vendors they perceive to be leaders in these eleven categories:

“Although Enterprise IT giants mostly prefer to sell their branded products, they are carefully building brand equity for their open networking and bare metal products,” said Frank Berry, CEO and Sr. Analyst, IT Brand Pulse. “This is evidenced by IT pros selecting Arista and Dell EMC as market leaders for bare metal switch OS and open networking switches.” 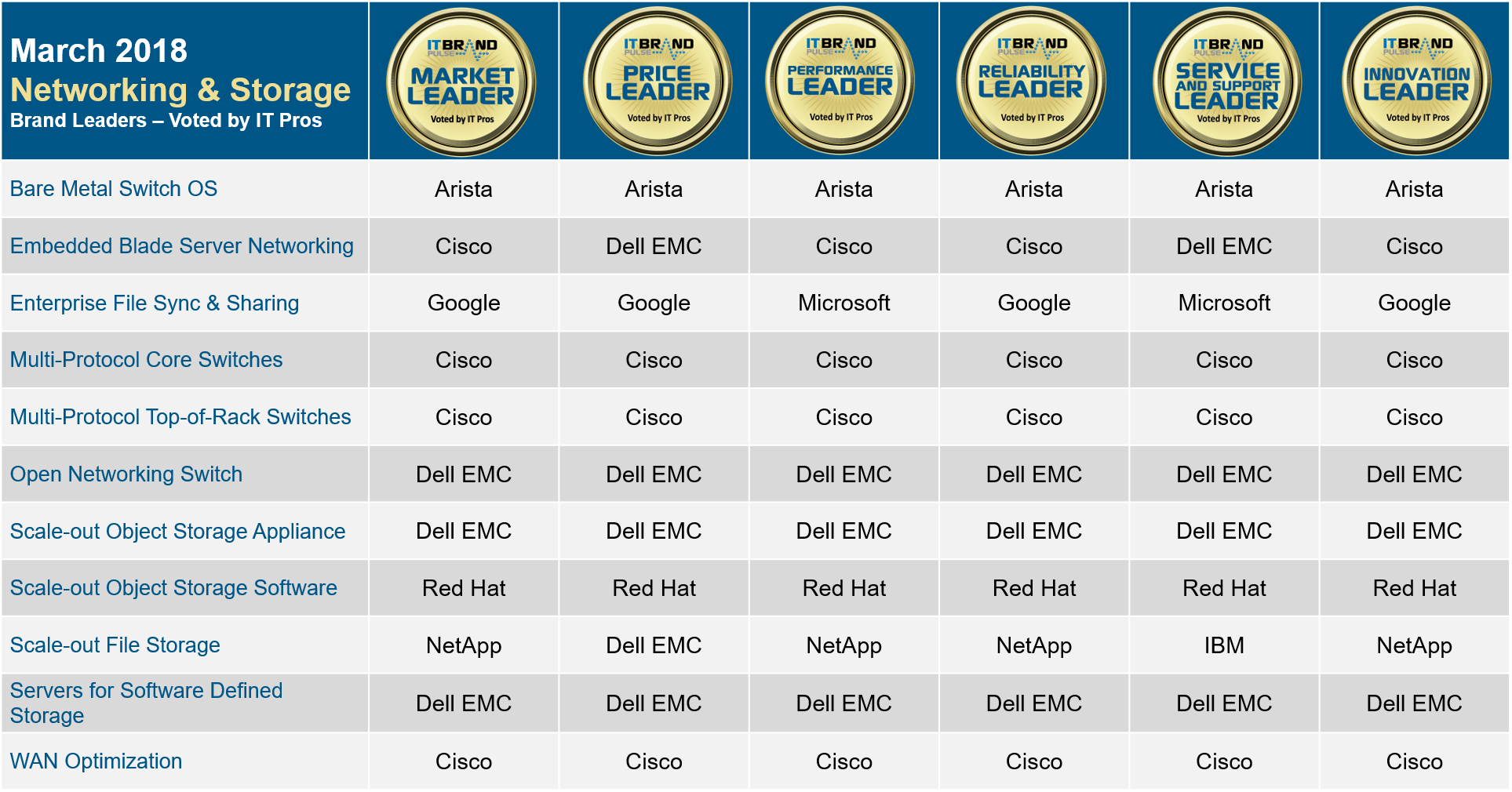 NetApp
Scale-out File Storage
NetApp retained Market leadership for Scale-out File Storage, along with accolades for Performance, Reliability, and Innovation. Dell EMC was named Price Leader and finished second as Market Leader; while IBM walked away with Service & Support and rounded out the third market award.

“In 2018, digital transformation is only possible through innovative data management solutions that are performant and reliable in both data center and hybrid cloud environments. We are especially pleased to be recognized in the innovation category in back-to-back years, which reflects our mission to build future-ready solutions that fuel our customers’ digital transformation as they increasingly invest in artificial intelligence, machine learning, real-time analytics and other data-driven technologies,” said Jeff Baxter, Chief Evangelist, ONTAP at NetApp.

Cisco
Embedded Blade Server Networking
Former runner-up in this section, Cisco, secured the Market Leader accolade this year along with honors for Performance, Reliability, and Innovation. After five consecutive years on top, Dell EMC dropped to the second market spot, but was able to hold onto Service & Support and Price; followed by HPE, which finished third overall.

Multi-Protocol Core Switches
Expanding this section from Ethernet to Multi-Protocol Core Switches, Cisco was voted Market Leader for the eighth consecutive year with over two thirds of the votes; all while completing the sweep for Price, Performance, Reliability, Service & Support, and Innovation. Following behind were Dell EMC and HPE as number two and three in the market category.

Multi-Protocol Top-of-Rack Switches
The ToR Switch segment has been expanded to Multi-Protocol as well, with Cisco winning over 65% of the votes to be named Market Leader (fifth year) and picked Price, Performance, Reliability, Service & Support, and Innovation.  HPE and Dell EMC captured the next two shares of the market titles, in that order.