SAN CLEMENTE, CA — June 16, 2021— IT Brand Pulse, a trusted source for research, data and analysis about data center infrastructure, today announced the results of 2021 IT pro voting for server product leaders. Once a year the independent, non-sponsored surveys asks which vendors are perceived to be the market, price, performance, reliability, service and support, and innovation leader for eleven server-related product categories.

“In this survey round, IT pros favored tried and trusted brand leaders,” said Frankie Berry, IT Brand Research Analyst at IT Brand Pulse. “Amazon Web Services demonstrated the power of their brand with IT pros voting the company Market Leader in the nascent arm-Based CPU and Kubernetes Management Platform categories.” 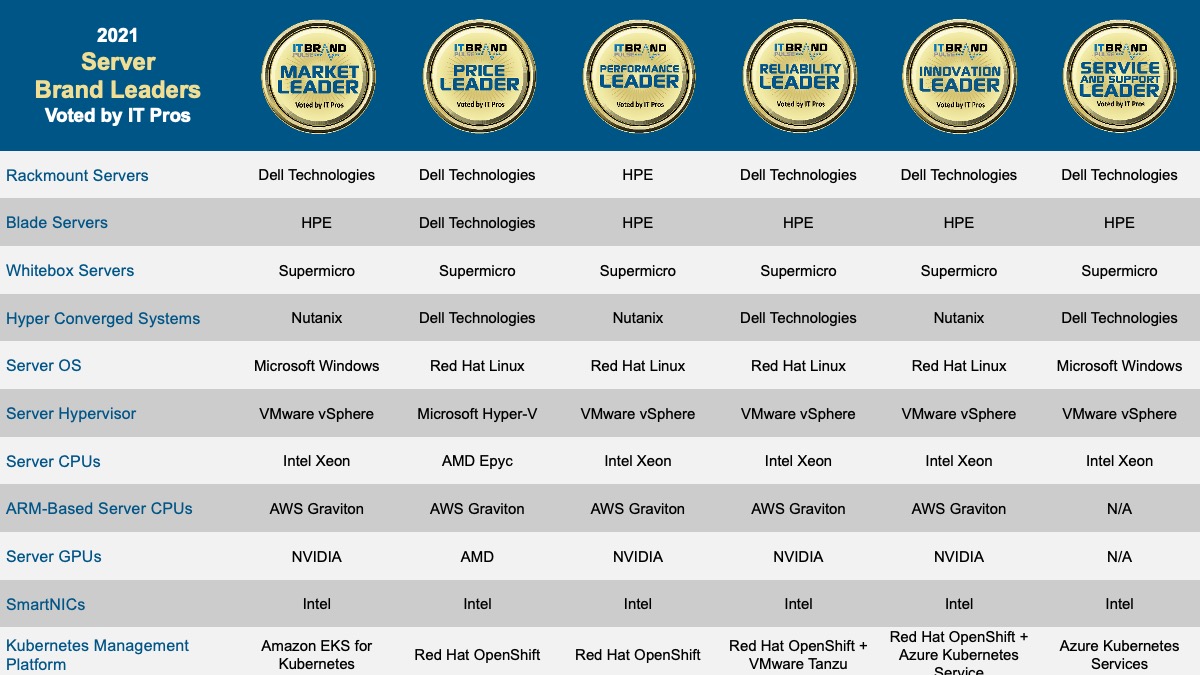 In one of the most competitive segments of data center infrastructure, Dell and HPE battle for market share and brand leadership for rackmount servers. In the 2021 brand leader survey, IT pros voted Dell the Market, Price, Reliability, Innovation, and Service & Support Leader. HPE was voted the Performance Leader.

Turning the tables on the results of the rackmount server survey, IT pros selected HPE as the Market, Price, Reliability, Innovation, and Service & Support Leader. Dell was selected Price Leader for blade servers once again, preventing a clean sweep of the category by HPE.

IT pros strongly expressed their preference for the Supermicro brand by selecting the company as the leader in all six categories. Half to 64% of IT pros consistently voted Supermicro a category leader while the highest second place vendor received barely more than 15%.

Nutanix and Dell dominated voting for hyperconverged system leadership. Nutanix was chosen as the Market, Performance, and Innovation leader, suggesting that IT pros value performance and innovation in their perception of market leader. IT pros recognized Dell as the Price, Reliability, and Service & Support Leader for hyper converged systems.

IT pros repeated the voting they have delivered in every server CPU brand leader survey since 2009. Intel was selected as the brand leader in every category except price. Over 80 percent of surveyed IT pros recognize Intel as the Market Leader.

AWS was able to dethrone Marvell’s ThunderX in this year’s voting, sweeping all six categories of brand leadership. The strong brand recognition and innovative spirit of AWS resulted in 64 percent of IT pros selecting Graviton as Market Leader for AWS-based server CPUs.

NVIDIA was chosen as the Server GPU leader in every category except Price. We expect this trend to continue for the foreseeable future. AMD was able to secure Price Leader recognition for its Epyc GPUs in a category historically dominated by NVIDIA. Perhaps crypto miners are hoping to get more bang for their buck.

Windows has overshadowed Linux in terms of market share and brand leadership. In the 2021 IT brand leader survey, Red Hat (Linux) was voted brand leader in 4 of 6 categories. However, Microsoft (Windows) was voted the Market leader and Service & Support leader. This demonstrates that service and support define market leadership for server operating systems. While Red Hat was not able to secure the Market Leader votes for Server OS, IT pros voted the company Price, Performance, Reliability, and Innovation Leader.

Container management platforms are a key battleground because they will control most workloads in the world’s data centers. Today there is no clear brand leader with IT pros choosing Amazon, Microsoft, and Red Hat as leaders in at least one category. The strong AWS brand resonates with IT pros, who selected Amazon EKS for Kubernetes as Market Leader.

Once again, IT pros voted for Intel across all brand leadership categories for Smart NICs. Just under 70 percent of IT pros voted Intel Market Leader, leaving a wide margin between second place Mellanox with 20 percent of the votes.

View the complete survey report for an in-depth look at the survey results.