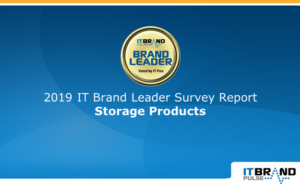 SAN CLEMENTE, CA—April 24, 2019— IT Brand Pulse, a trusted source for research, data and analysis about data center infrastructure, today announced the 2019 Storage Brand Leaders, voted by IT professionals from around the world. The independent, non-sponsored annual survey asked which vendors are perceived to be the market, price, performance, reliability, innovation, and service and support leader for 14 product categories.

“Large storage vendors flexed their brand muscles in this round of surveys” said Frank Berry, CEO and Sr. Analyst, IT Brand Pulse. “Not a single start-up made the leaderboard as traditional leaders such as Dell EMC, Microsoft, Pure Storage, Seagate and Veritas dominated IT pro voting for mature and emerging products.” Dell EMC
Enterprise Backup Software & Appliances
For the second year in a row, Dell EMC was chosen for Market, Performance, Reliability, and Service and Support leadership. Veeam held on to the Innovation title for the third year while snagging Price and coming in second for Market leader. Commvault tied with Veritas for third in voting for Market leader.

Hybrid (HDD & SSD) SAN Arrays
Dell EMC controlled the board and was recognized by IT Pros for the seventh time as Market Leader as well as Price, Performance, Reliability, Innovation, and Service & Support staying in front of second and third Market finishers NetApp and HPE.

Scale Out File & Object Storage Appliances
In this newly-added category, Dell EMC was the clear winner across the board for Scale Out File & Object Storage Appliances, as IT Pros chose the company for leadership in Market, Price, Performance, Reliability, Innovation, and Service & Support. NetApp finished second as Market leader, followed by IBM in third.

Pure Storage
Ageless Storage
Pure Storage dominated across the board for Ageless Storage; selected by IT Pros as Price, Performance, Reliability, Innovation, Service and Support leader and for the second year in as many surveys, gained the Market leader title. Dell EMC was voted second for Market with IBM following close behind.

“Here at Pure, customers are our number one motivation. Our goal is to constantly innovate on product, on business model, and on customer service, and the result isn’t just the leading growth rate in our category – It is the leading customer satisfaction in our category,” said Robson Grieve, CMO of Pure Storage. “We are honored to be recognized by IT Brand Pulse as the global market leader in the Ageless Storage and On-Premises Enterprise Storage as a Service, and these awards provide further validation that we are on the right track.”

Seagate
Enterprise HDDs
While the top two companies of Enterprise HDDs were close in all categories, Seagate has proven itself a leader by being voted Market for the seventh year in a row; also picking up titles for Price, Performance, Reliability, Innovation, and Service and Support, sweeping the board for a two-year streak. Western Digital came in second for all categories trailed by Toshiba.

“Receiving five accolades for storage performance in the latest IT Brand Pulse awards is a true testament to our dedication to listening to our customers and addressing their end-to-end storage management needs,” said, Joe Kim, executive vice president and global chief technology officer, SolarWinds. “Providing IT pros powerful, affordable, and easy-to-use IT management software is at the core of our philosophy and commitment to making their jobs easier.”

Veritas
Distributed Database Backup & Recovery
In the third IT Brand Pulse survey for this product category, IT Pros voted Veritas as the new leader across the board for Market, Price, Performance, Reliability, Innovation, and Service and Support; unseating previous leader Rubrik Datos IO who had swept the board twice before. Commvault and Rubrik Datos IO finished as second and third Market leaders, in that order.