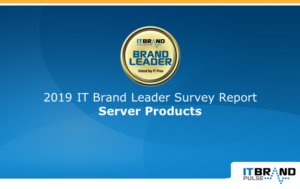 SAN CLEMENTE, CA—July 15, 2019— IT Brand Pulse, a trusted source for research, data and analysis about data center infrastructure, today announced the results of 2019 IT pro voting for servers brand leaders. Once a year the independent, non-sponsored survey asks which vendors are perceived to be the market, price, performance, reliability, service and support, and innovation leader for eleven server-related product categories.

“This round of surveys was highlighted by new types of processors whose presence are expected to grow inside servers” said Frank Berry, CEO and Sr. Analyst, IT Brand Pulse. “Marvell was chosen as the leader for Arm-based server CPUs, NVIDIA for server GPUs, and Intel for both server LOM and SmartNICs.” 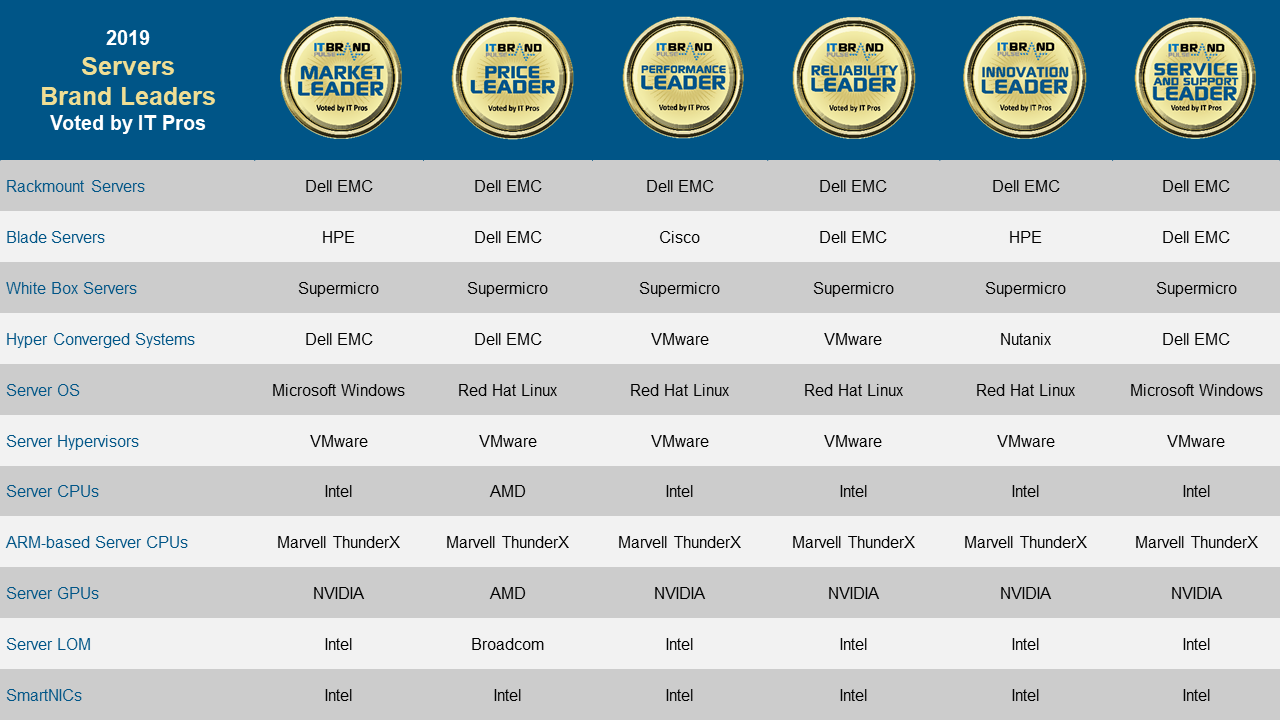 Dell EMC
Rackmount Servers
After a brief hiatus in 2018, IT Pros have once again voted Dell EMC the Market leader for Rackmount Servers, making it their third time in seven years. IT Pros voted for Dell EMC as leader across the board for Price, Performance, Reliability, Innovation, and Service and Support. HPE was a close second for Market Leader, followed by Cisco in third.

Hyper Converged Systems
In this newly added survey category, Dell Technologies was represented by Dell EMC and VMware. Together the companies won votes of IT pros in 5 of 6 categories of brand leadership. Hyperconverged pure-play Nutanix, who has recently suffered from negative press related to their financial performance, was selected as the Innovation Leader.

Intel
Server CPUs
Intel proved to be the favorite among IT Pros for Server CPUs yet again—voted as eight-time Market leader, Performance, Reliability, Innovation, and Service and Support. Intel almost had a clean sweep, but AMD managed to pull out just ahead to secure the Price leader spot. Following from a distance, IBM was named second for Market Leader with AMD as third.

Server LOM
For the sixth year in a row, IT Pros recognized Intel as the Server LOM Market leader; as well as Performance, Reliability, Innovation, and Service and Support. Broadcom was selected as Price leader and placed second as Market leader, trailed by third place Mellanox.

SmartNICs
In the new survey category for network accelerators, IT Pros voted for Intel as Market, Price, Performance, Reliability, Innovation, and Service and Support Leader. Second and third place votes for Market leader went to Mellanox and BittWare.

Marvell
Arm-based Server CPUs
With last year’s brand leader Qualcomm dropping out of the market, Marvell ThunderX was recognized by IT Pros as the Market, Price, Performance, Reliability, Innovation, and Service and Support leader for Arm-based Server CPUs. Ampere eMag was voted second place all around.

“Marvell is honored to be recognized by IT professionals worldwide as the brand leader across all categories for Arm-based server CPUs,” said Gopal Hegde, vice president and general manager, Server Processor Business Unit at Marvell Semiconductor, Inc.  “Marvell® ThunderX® processors, based on the Arm®v8-A architecture, bring industry-leading compute and memory performance and technology innovation backed by a rich ecosystem. As the most widely supported and deployed Arm-based server processor today, Marvell ThunderX processors power applications that range from high-performance cloud computing all the way to the network edge.”

Microsoft Windows
Server OS
In a major change from previous surveys, Red Hat was voted the leader in 4 server OS brand leader categories: Price, Performance, Reliability, and Innovation. Red Hat HP-UX and Oracle Solaris tied for third. Microsoft held onto their Server OS Market title for the seventh straight year while also being voted the leader for Service and Support.

NVIDIA
Server GPUs
As expected, NVIDIA dominated IT pro voting and was chosen Market leader for the third year in a row, along with being named the leader for Performance, Reliability, Innovation, and Service and Support. Intel finished second for Market while AMD came in third; although, AMD managed to snag the Price leader title.

Supermicro
White Box Servers
For the second year in a row, Supermicro swept IT pro votes as they dominated in the White Box Servers category—holding onto the titles for Market, Price, Performance, Reliability, Innovation, and Service and Support. Little-known, but high-volume suppliers to the big cloud vendors, Inventec and Quanta, tied for the second as Market leader.