SAN CLEMENTE, CA—March 6, 2019— IT Brand Pulse, a trusted source for research, data and analysis about data center infrastructure, today announced the 2019 Networking Brand Leaders, voted by IT professionals from around the world. The independent, non-sponsored annual survey asked which vendors are perceived to be the market, price, performance, reliability, service and support, and innovation leader for thirteen product categories—including coverage of 400Gb Ethernet Switches and Network Virtualization for the first time.

“This round of surveys was highlighted by some changing of the guard” said Frank Berry, CEO and Sr. Analyst, IT Brand Pulse. “Ethernet pioneer Broadcom is now the brand leader for both Fibre Channel HBAs and switches, F5 unseated Citrix as the brand leader for ADCs, and Big Switch displaced Cumulus as the market leader for Open Switch Operating Systems.” 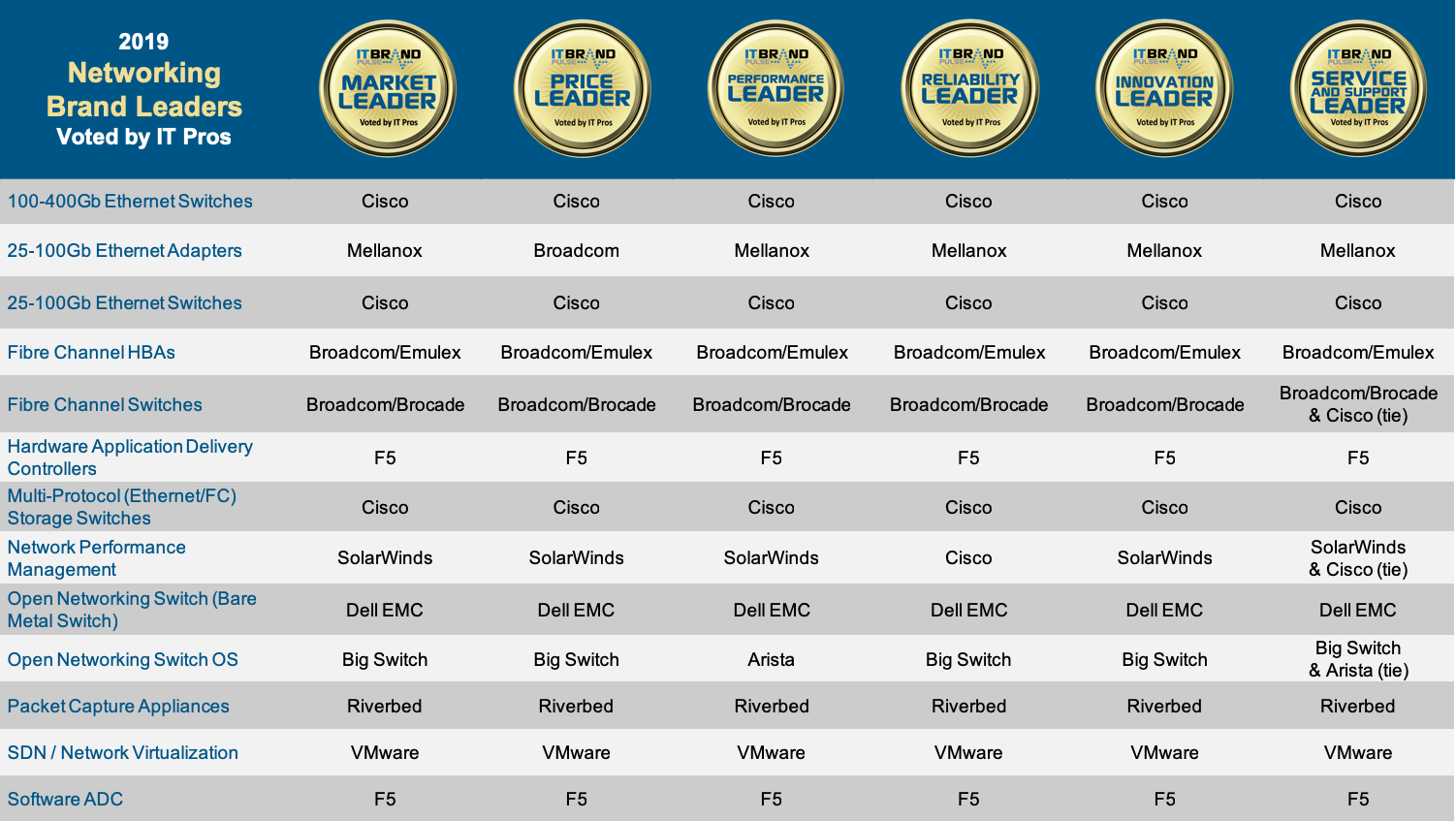 Mellanox
25-100Gb Ethernet Adapters
For the second year in a row, Mellanox gained the titles for Market, Performance, Reliability, Service & Support and Innovation leader. However, Broadcom unseated Mellanox for this year’s Price leader, as well as tying with Intel for second place Market leader.

“Mellanox’s remains committed to providing our customers with the most efficient and innovative data delivery and acceleration offload technologies for network adapters” said Rob Davis, VP of Storage Technology, Mellanox Technologies. “As server workloads continue to experience exponential growth, in addition to the needs for higher bandwidth and tighter security, customers continue to select Mellanox as the innovation and market leader to enhance their modern data center infrastructure. We are gratified that customers recognize the value of our superior features, performance scalability, reliability, service and support.”

Broadcom
Fibre Channel HBA
Broadcom and their Emulex brand HBAs dominated across the board for Fibre Channel HBAs for the third year in a row; winning all six awards: Market, Price, Performance, Reliability, Service & Support and Innovation. Marvell with their QLogic HBAs was the runner-up leader across the board; ATTO settled for third.

Fibre Channel Switches
In a tight race, the Brocade switches from Broadcom emerged as Market Price, Performance, Reliability, and Innovation leader. Cisco tied with Broadcom/Brocade for Service and Support leader.

Software ADC
For the first time in five years, F5 has been named the Market leader for Software ADC, as well as Price, Performance, Reliability, Service & Support and Innovation. Former and long-standing champion Citrix was named the second place Market leader, with Fortinet finishing third.

SolarWinds
Network Performance Management
SolarWinds won Market leader for the second year in a row, while also claiming Price and Performance. Cisco—second place Market leader—claimed the Reliability leader award as well as tying with SolarWinds for Service and Support and Innovation. Riverbed rounded out the top three Market leader positions.

“Recognition as a leader in the latest IT Brand Pulse awards reflects our commitment to our user community, their challenges, and needs,” said Joe Kim, executive vice president of engineering and global CTO, SolarWinds. “We continue to be dedicated to providing simple, powerful, and affordable products that improve IT performance monitoring.”

“Five years ago, Dell EMC helped lead the industry to a new networking paradigm, one based on providing choice and flexibility to achieve desired business outcomes,” said Drew Schulke, vice president, Dell EMC Networking & Solutions. “We are honored to have been chosen as a leader in Open Networking by the people whose opinions matter most — customers.”

“We’re honored to be included in this new category and seen by our peers as a Brand Leader by IT Brand Pulse. This accolade follows Riverbed SteelCentral being named a Leader for Gartner’s 2019 Magic Quadrant for Network Performance Monitoring and Diagnostics for a sixth consecutive year,” said Nik Koutsoukos, Vice President, Product Marketing, at Riverbed. “We believe our leadership position reflects the rich visibility we deliver into the network performance of hybrid and cloud environments, supported by time-saving troubleshooting workflows.”