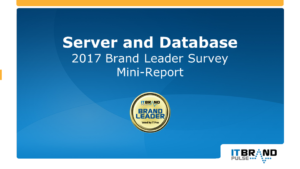 SAN DIEGO, CA—March 16, 2017—IT Brand Pulse, a trusted source for research, data and analysis about data center infrastructure, today announced the results of the recent IT brand leader survey covering Server and Database products. Finding the right SQL DBA services for your business is not always easy. However, whether you are looking to get remote support for sql, or require holistic technical support, these are the products that stand the test of time.

IT professionals from around the world responded to the independent, non-sponsored survey in February 2017, asking which vendors they perceive to be leaders in these fourteen categories:

“This round of surveys is highlighted by Qualcomm establishing early brand leadership in the emerging market for ARM-based server processors,” said Frank Berry, CEO and Senior Analyst at IT Brand Pulse. “Dell EMC, Cisco and HPE continue to dominate IT pro voting for rackmount and white box servers, integrated systems, blade servers and dense microservers, with NVIDIA, the inaugural Market Leader for our first-time category of Server GPUs.” 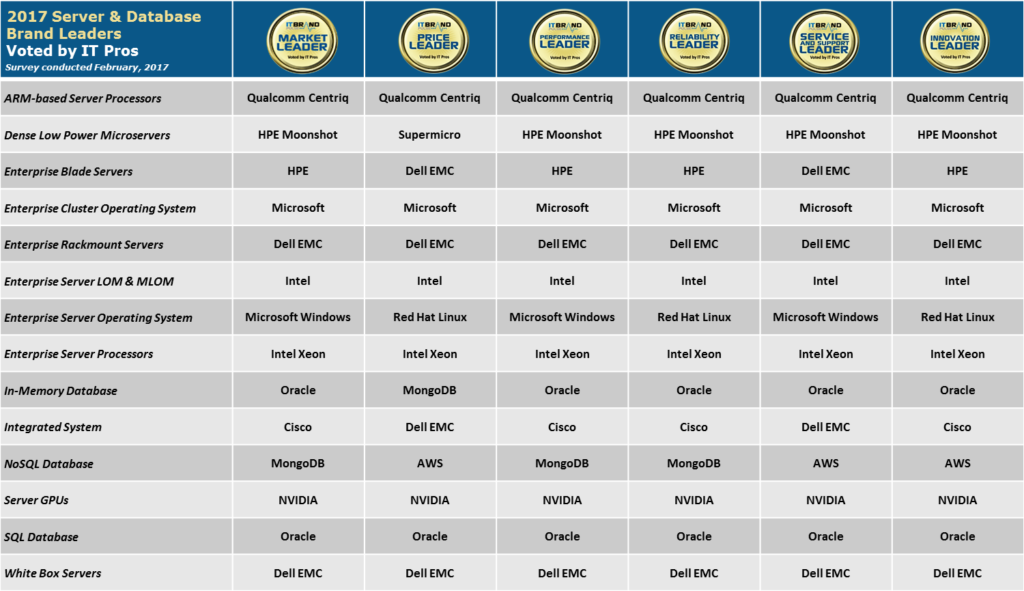 “We’re honored that IT Pros voted HPE BladeSystem as the Market Leader in enterprise blade servers for the seventh consecutive year,” said Krista Satterthwaite, Director of Marketing, HPE Datacenter Infrastructure Group. “HPE continues to deliver innovation which drives significant advantages for customers on their path to a composable infrastructure by deploying HPE OneView. With a strong foundation of solutions to address demanding workloads, HPE is focused on helping customers streamline their operations for optimal business results.”

“We are honored to be recognized by IT professionals as the market leader in both the Enterprise Server and Cluster OS categories,” said Mike Schutz, GM, Cloud Platform, Microsoft Corp. “Our server OS technology is designed with the IT professional in mind, and we know enterprises need trusted solutions that can match today’s business demands. Windows Server 2016 delivers multiple layers of security, software-defined datacenter, and application innovation features to empower organizations to transform their applications and infrastructure, all backed with industry-leading services and support.”

“Artificial intelligence is a new computing model that requires new server architectures,” said Roy Kim, Director of NVIDIA Tesla Product Management. “It is a true honor to be recognized by our customers and the industry at large as the market leader in this space. We are committed to driving further innovation into our GPU computing and AI platform to advance deep learning, machine learning and other compute-intensive technology for the benefit of all.”

“MongoDB is honored to be recognized by IT pros as the Market, Performance and Reliability leader in NoSQL Database,” said Brooks Crichlow, VP of Product Marketing at MongoDB. “MongoDB is the most popular modern database choice because we help organizations develop, scale, and manage mission-critical applications in ways they never could before — whether you’re accelerating the development of new applications on MongoDB, or migrating existing workloads to MongoDB from legacy platforms. Companies of all sizes are building mission-critical applications on MongoDB.”

IT Brand Leader Surveys
IT Brand Pulse awards are the symbols for brand leadership. Winners are voted by global IT pros in surveys that are independent, non-sponsored research. The surveys are designed to measure the pulse of brand leadership in specific product categories. Within each product category, respondents choose the overall market leader, as well as the leader in price, performance, reliability, service and support, and innovation. Voters are provided with a category description at the start of each product section, a randomized choice of vendor answers, and the ability to write-in a vendor, if not listed.