IT professionals from around the world responded to the independent, non-sponsored survey in January 2017, asking which vendors they perceive to be leaders in these twelve categories:

“The results of this year’s networked storage surveys reflect the market share success of companies like Cisco, Dell EMC, NetApp and Quantum in their respective strongholds,” said Frank Berry, CEO and Senior Analyst at IT Brand Pulse. “The results also show strength of the Broadcom brand which for the first time overcame perennial leader QLogic in the Fibre Channel HBA category.” 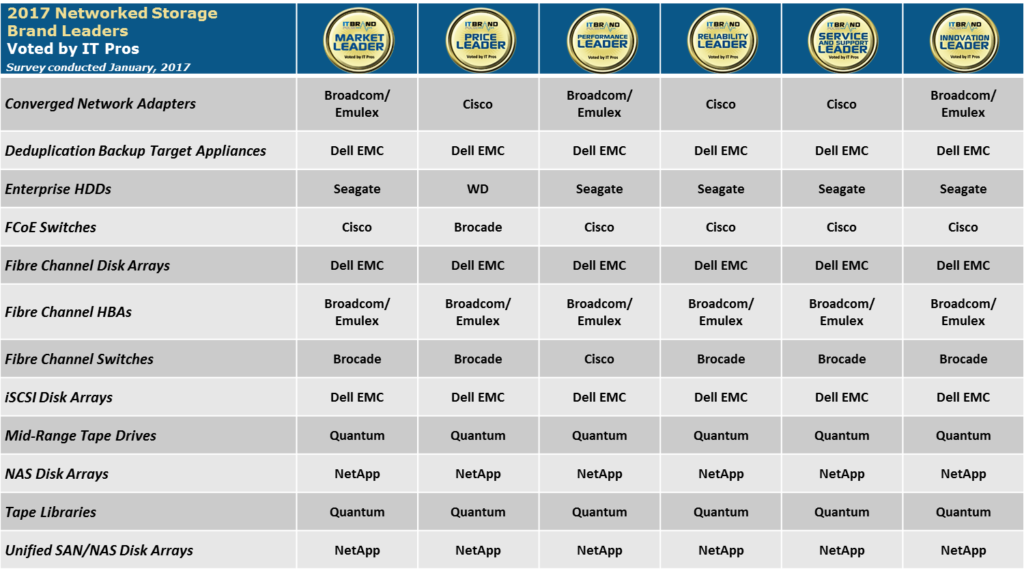 “We are honored to be recognized by our customers and peers as the industry leader in Fibre Channel HBAs.  Customers are modernizing their datacenters with solid-state arrays which require higher speed Fibre Channel networks.  A key reason why customers are selecting Emulex HBAs by Broadcom is because of our Dynamic Multi-threaded, Multi-core Architecture which offers up to a 3X performance advantage over the competition,” said Brian Reed, vice president of marketing, Emulex Connectivity Division, Broadcom.

“NetApp unified hybrid storage arrays give enterprises the efficiency and agility they need to respond easily to changing requirements,” said Adam Fore, director, Solutions and Product Marketing, NetApp. “We are honored to be recognized by IT practitioners who count on our highly scalable systems to manage their business critical workloads.”

“Seagate is pleased to be recognized by IT Brand Pulse for the past five years as the top Enterprise HDD leader from this prestigious group of Data Center professionals. It’s in our DNA to engineer, build and deliver innovative, reliable high performing hard drives that meet the storage efficiency needs of both on-premise and cloud data centers worldwide”, said Barbara Craig, Sr. Product Marketing Manager at Seagate Technology.

“Cisco is pleased to be recognized for leadership and innovation in FCoE Switches for the eighth year in a row,” said Dhritiman Dasgupta, VP of Product Marketing for Cisco Data Center Solutions.  “FCoE is a central component in the Cisco Data Center portfolio, and helps to enable converged architectures through Cisco Unified Computing System (UCS), Cisco Nexus platforms, and Cisco MDS platforms.”

IT Brand Leader Surveys
IT Brand Pulse awards are the symbols for brand leadership. Winners are voted by global IT pros in surveys that are independent, non-sponsored research.  The surveys are designed to measure the pulse of brand leadership in specific product categories. Within each product category, respondents choose the overall market leader, as well as the leader in price, performance, reliability, service and support, and innovation. Voters are provided with a category description at the start of each product section, a randomized choice of vendor answers, and the ability to write-in a vendor, if not listed.