IT professionals from around the world responded to the independent, non-sponsored annual survey in June 2017, asking which vendors they perceive to be leaders in these fourteen categories:

“The maturing of the flash industry is evident as hot start-ups, along with their brand leadership positions, have been acquired by the traditional enterprise storage giants,” said Frank Berry, CEO and Sr. Analyst, IT Brand Pulse.  “Micron surprised and impressed by beating traditional system leaders to market with an NVMeoF storage array, and was rewarded by IT pros with their votes for market leader.” 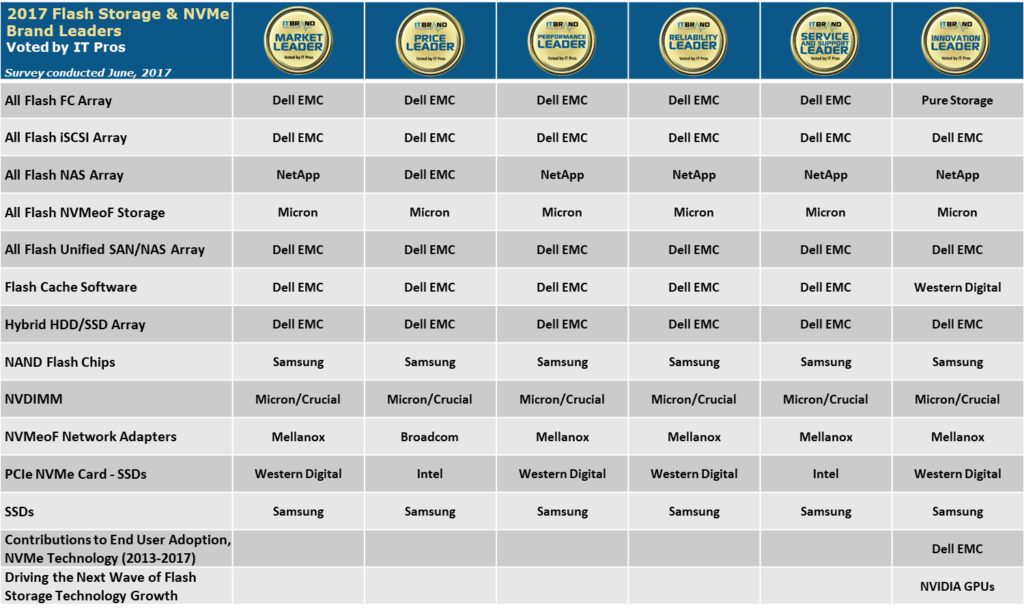 “At Micron, we are committed to enabling our customers to gain the most from shared NVMe across multiple applications, delivering more efficient use of IOPS and storage capacity,” said Eric Endebrock, ‎vice president of storage solutions marketing at Micron. “We are proud to have our SolidScale platform recognized for its reliability and support in bringing this next revolution of all flash storage forward.”

“We’re extremely honored that Samsung’s technological leadership and strong customer focus in solid state storage and NAND flash memory have been recognized by those ushering in the next generation of data centers and public clouds,” said Jim Elliott, corporate vice president, memory marketing, Samsung Semiconductor, Inc.  “It reaffirms our commitment to performance, innovation and reliability with excellent service & support, so that we can continue to deliver best-in-class IT solutions.”

“Digital transformation requires companies to modernize their IT infrastructure to support evolving business models and new revenue streams,” said Jeff Baxter, chief evangelist for ONTAP at NetApp. “As the fastest growing all-flash array vendor, NetApp has seen first-hand with our customers that high performance flash technology is a crucial component of modern infrastructure.”

“Our broad range of PCIe card solutions are among the most proven and widely deployed PCIe solutions for data centers,” said Anand Jayapalan, vice president of client and enterprise compute solutions marketing at Western Digital. “We are honored to be recognized by IT Pros, an award based on feedback by data center customers. It is further testament to Western Digital’s commitment to delivering an unmatched solutions portfolio for IT administrators managing the growing data needs of their most demanding cloud, hyperscale and enterprise application environments.”

“We are honored to be recognized by our customers and peers for innovation and market leadership for our ConnectX® network adapter’s support for NVMeoF for the second straight year,” noted Rob Davis, VP of Storage Technology, Mellanox Technologies. “We have doubled down on our NVMe over Fabrics support with the introduction of our BlueField™ Storage SOC and ConnectX-5 network adapters. Both solutions offload the NVMe over Fabrics protocol, enhancing not only low latency and high bandwidth, but also offering extremely low CPU overhead.”