IT professionals were also asked who they thought contributed most to Innovation over the past five years in NFV and Bare Metal Switches for the enterprise.

In the SDN Enabled Switch category, Cisco led the way as Market Leader with HP and Brocade coming in second and third, respectively. For SDN Platform, Juniper secured number two, with a three-way tie for third: Brocade, HP and IBM.

“Cisco is honored to be recognized for market leadership in FCoE Switches, Ethernet Core Switches, Ethernet Top of Rack Switches, SDN Enabled Switches and for the first time, SDN Platform,” said Shashi Kiran, senior director for Cisco Data Center and Cloud Networking. “We are particularly pleased that the industry has recognized our support of SDN for Cisco’s Application-Centric Infrastructure, including our involvement in OpenStack and OpFlex, and our open-source contribution of group-based policy.”

“Dell’s goal is to fundamentally change the nature of the networking business, moving towards the disaggregation of hardware and software,” said Adnan Bhutta, director of global open networking strategy, Dell Networking. “In this new open, multi-vendor ecosystem that’s becoming all the more prevalent, the customer finally gets to choose exactly the components they need to build the software-defined datacenter of the future without having to worry about vendor lock-in.” 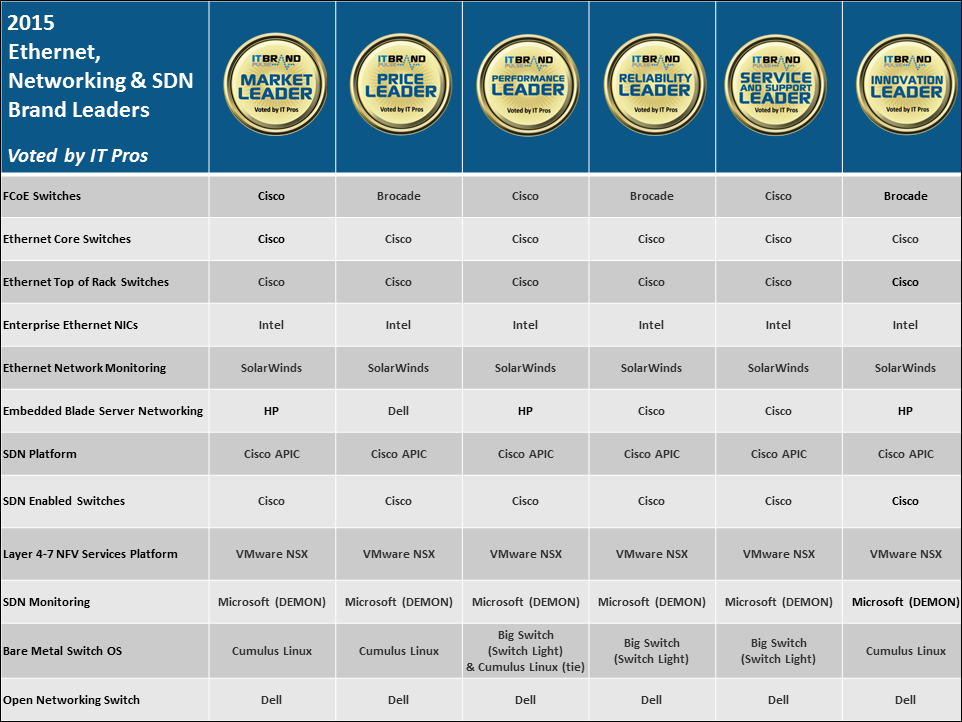 “These first-place awards, based on survey results collected by IT Brand Pulse from world-class companies, reflect the trend of expanded open networking adoption by both enterprises and service providers,” said Reza Malekzadeh, VP Business, Cumulus Networks. “Data center managers recognize initial cost savings with high-performance bare metal switching, and with Cumulus Linux, the operating system for open networking, they secure even larger OpEx savings via automation for faster and more accurate service delivery, affordable capacity as they scale, use of the same Linux tools on both servers and switches, and the ability to innovate with this true Linux networking OS as their platform.”

“Our number one priority at SolarWinds is to ensure IT and DevOps professionals have the right products to solve the monitoring and management challenges they face on a daily basis without regard to the technology being in an on-premises datacenter or in the public cloud,” said Suaad Sait, executive vice president, products and markets, SolarWinds. “We’re honored to be recognized for the third year in a row as the IT Brand Pulse all-around leader in Ethernet Network Monitoring. It’s a welcome acknowledgement from the IT pro community that not only are we delivering on our promise to provide the most comprehensive and easy-to-use IT management product portfolio, but that we are also succeeding at continually improving these products to meet the evolving complex needs of today’s Hybrid IT.”

IT Brand Pulse awards are the symbols for brand leadership. Winners are voted by IT pros in surveys that are independent, non-sponsored research. The surveys are designed to measure the pulse of brand leadership in specific product categories. Within each product category, respondents choose the overall market leader, as well as the leader in price, performance, reliability, service and support, and innovation.

About IT Brand Pulse

IT Brand Pulse is a trusted source of research, data and analysis about private, public and hybrid cloud IT infrastructure, including servers, storage, networking and operating platforms. Learn more at www.itbrandpulse.com.